Restaurant of the week: Hām 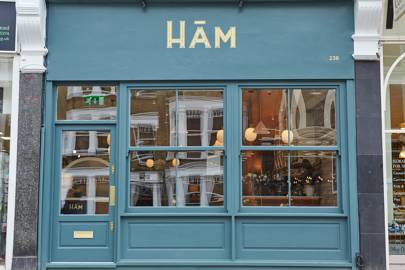 West End Lane, West Hampstead’s gentle, heavily residential high street may not smack as a culinary hotspot but, thanks to the recent opening of Ham, it’s set to swing with foodies from every corner of the capital. Ham (which is the Old English word for home) has Matt Osborne (formerly of The Ledbury) at the helm and it's the first restaurant for owner Rose Tuckey who has swapped a career in the city to open her own place, so keen is her love of great dining. With its warm green leather banquet seating, soft deco-esque lighting and sweeping bar, the restaurant has an informal and casual vibe that hums with the gentle chatter of happy diners. There are just under 50 covers (but book a table because word is spreading fast and it’s unlikely you’ll get a table if you walk in). And, despite the super-relaxed atmosphere, the food that pours from out of the kitchen is nothing short of sensational. Fay Maschler and Giles Coren are already fans (the doors of Ham only opened three months ago), and Osborne takes the providence of all of his food very, very seriously. Everything is sourced from predominantly small, family-run companies which are almost obsessive in the welfare of their animals and the purity of their produce (all organic, of course), and the Ivy House butter they source from Somerset makes the bread and butter worthy of mention in its own right. 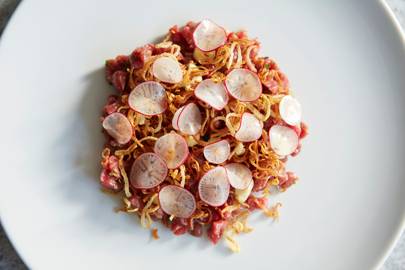 Following that aforementioned butter, which is served with perfect sourdough from nearby Margot Bakery, the rainbow trout with tamarind gazpacho and sorrel is heavenly, the tempura vegetables with miso hollandaise are so decadent and you could eat the dish daily and never tire of it. (Its menu changes regularly but we hope that’s a mainstay). Cornish pollack is served elegantly over a wild garlic and native lobster congee (this is almost like porridge in consistency, so it's unlike anything else you’ll get in neighbouring restaurants); it’s utterly delicious and loaded with generous puffs of fresh lobster meat. Gnocchi is a hard dish to nail but nail it Ham has and it swims in fresh peas, basil, dill and salted ricotta – no stodge in these parts. The chocolate tort with strawberries and yoghurt ice cream is the perfect full stop to the meal, though we can’t finish before mentioning the impressive wine selection. The list is very carefully curated but the showstopper is a Moroccan Domaine De La Zouina Syrah that, admittedly, went down a little too well.

Unpretentious and bistro in feel Hām may be, but don’t be fooled: the food is that of the top London restaurants and, with so much love from critics and locals alike, it seems Ham is destined for greatness.

A Big Thank You

A day in the life of Darren